Seasonal Pasture Myopathy, in the northern temperate zone is a danger from some tree species in the genus Acer, the maples. Most species are safe, but two species are notably dangerous in their production of the dangerous compound hypoglycin-A; the native North American species, Box elder maple, Acer negundo, and the northern European species, Sycamore maple, Acer pseudoplatanus, (not related to the Sycamore species as known in North America, Platanus spp.). Both of these maples frequently occur outside their native ranges, including in both Europe and North America and elsewhere.

Since these species are both maples (Acer spp.) they share an important and easy to find characteristic;

The Box Elder Maple, also called the Ash-leaved Maple is the only native maple with compound leaves (pinnate). Young shoots may have three-part compound leaves, but trees over 6 feet in height usually have leaves with 5 to 7 leaflets. Some individuals and whole western populations retain the three-part compound leaves throughout their lives. Small box elders with three leaflet leaves can look virtually identical to Poison ivy (Toxicodendron radicans) except that they have the opposite leaf arrangement of all maples and Poison ivy always has alternate leaf arrangement (above right).

Box elder trees are usually asymmetrical and crooked. As a pioneer-species, they are fast-growing and not long-lived, and can drop branches in high-wind events when large.

Box elder seed bearing flowers have no petals and are reduced to simple pistils.

Box elder maple fruits (samaras) hang in pendulous clusters (something they have in common with Sycamore maple, Acer pseudoplatanus). The seed clusters become attractive to foraging animals in late summer and fall (below) in pastures with seed-bearing individuals. Dried hanging seed clusters are available throughout the winter and early spring (above right).

The Sycamore Maple, is not as common of the introduced European maples, as the Norway maple, Acer platanoides. Its leaf is five-lobed and simple, with a petiole of variable length. The flower stalk includes both the pollen-bearing and the seed bearing flowers together. The habit of the maturing tree can be straight and symmetrical (below).

The Sycamore Maple, sometimes simply called ‘sycamore’ in Europe, is NOT what is called sycamore Platanus spp. (Platanus occidentalis, shown below), in the US. This sycamore is not a maple and it is non-toxic. It is characterized by the mottled pattern left on the trunk and large branches because of its habit of shedding plates of its bark during growth. 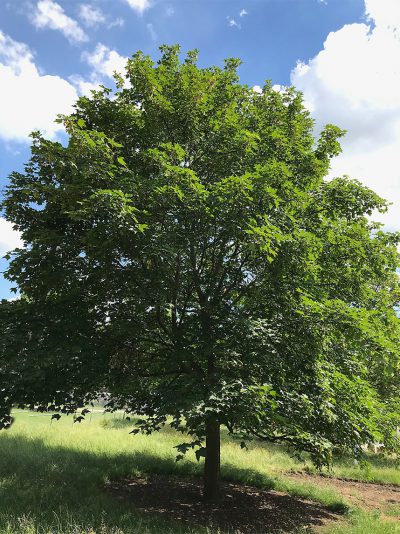 The Sycamore Maple, produces an elongated pendulous flower stalk with both sexes present on the same stem (occasionally segregated), superficially resembling that of the Box elder. 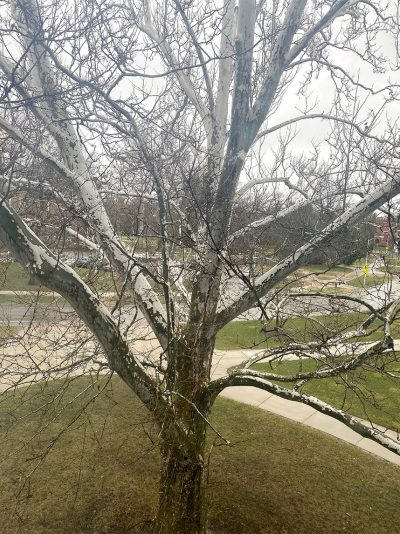 The tree called Sycamore (Platanus occidentalis), since it is not a maple does not produce winged samaras as its fruit. Sycamore fruits a spherical balls that hang from ~4 inch stems and are non-toxic.