Pigee, a seven-year-old intact female miniature pig, presented to Michigan State University’s Large Animal Food Animal Medicine’s Service for evaluation of an apparent dystocia. At home, prior to presentation, she began to show signs of agitation and nesting. Eight hours later, she was in active labor, but it was unproductive. After eating a small amount of food, she still hadn’t delivered any of the piglets; only some fetal membranes and uterine fluid were expelled. She was then referred to the MSU Large Animal Clinic.

On presentation, Pigee was bright, alert, and responsive. Crusting and alopecia over the caudal dorsum was within expected limits for Pigee’s miniature pig species. Fetal motion was palpable. Her udder was distended but milk couldn’t be expressed. A small amount of mucoid material was present on her hocks and tail. Contractions were evident.

After five hours of nonprogressive labor, Pigee was diagnosed with dystocia.

Following presentation and an examination, eight piglets were delivered with manual assistance via controlled vaginal delivery. Radiographs were taken after the delivery of seven piglets. Imaging displayed one remaining fetus in the uterus. The last fetus was able to be manually removed. One piglet was found to have died prior to delivery.

For the living piglets, rectal temperatures were normal, and all were able to nurse after delivery. While at the Hospital, Pigee was given a non-steroidal anti-inflammatory medication (Meloxicam) and a synthetic prostaglandin (Estrumate, given to aid in the passing of the remaining fetal membranes).

Incidence of dystocia in sows is low (one to two percent). Most accounts of dystocia in swine can be attributed to uterine inertia. Other causes include fetal malposition, deviation of the uterus, and maternal excitement, amongst others. 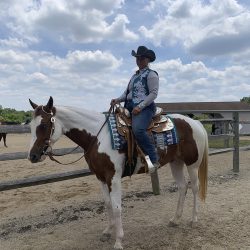 Client Communication and Coronavirus: The Critical Use of Media in Treating an MSU Equine Patient By Aimee Colbath on August 10, 2020 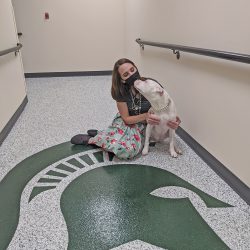 Thanks to MSU Veterinarians, the Beat Goes on for Long-Time Four-Legged Spartan August 10, 2020