Owner-directed aggression is problematic for any dog and owner; it most commonly comes in two forms: a genetic disorder referred to as Rage Syndrome, and a more typical diagnosis called Conflict Aggression.

The behavior associated with Rage Syndrome includes outbursts of aggression that are intense and at times unpredictable. These episodes also tend to be large dramatic responses relative to a seemingly benign situation. Affected dogs often freeze, stare, and may rapidly escalate to biting. This intense aggression contrasts with the dog’s otherwise pleasant personality. After episodes of aggression, dogs seem to not be fully aware of what just happened. Many dogs do not have dominant behavior, but likely have moments of mental “misfiring” due to underlying neurochemical abnormalities in their brains.

In comparison, Conflict Aggression is the diagnosis of the more typical variant of owner directed aggression. Dogs with Conflict Aggression tend to exhibit somewhat ambivalent body postures (e.g., tail tucked while lunging forward) and tend to display warning signs (e.g., growling) prior to a bite incident. Episodes of aggression tend to be related to predictable triggers over resources, invasion of the dog’s personal space, and grooming or handling. Dogs with this diagnosis often learn that aggression is an effective tool for ceasing uncomfortable interactions. These dogs are not dominant but are emotionally torn during moments of confrontation or discomfort.

Meet Ruby. Ruby was brought to the Michigan State University Veterinary Medical Center’s Behavior Service for complaints from her owners regarding her aggression.

Persistent triggers of growling, lunging, and snapping at either owner included petting of her back and physical contact with her while she was at rest. Growling, lunging, and snapping directed only toward the male owner included being approached while at rest on an elevated resting place, while on the female owner’s lap, or when in the kitchen during meal preparation. Ruby also was reported to bite when either owner attempted to place the harness on her. In all incidents of aggression, Ruby was reported to first bare her teeth, lay her ears back and tail down, and then lunge toward the victim. She also cowered after episodes of aggression.

When the Behavior Service team met Ruby, she was anxious, alert, and responsive. She was appropriate but not overtly social with Dr. Marie Hopfensperger, veterinarian for the Hospital’s Behavior Services. She solicited attention from both owners but spent most of the time on the female owner’s lap. After Dr. Hopefensperger evaluated Ruby, interacted with her, and ran a series of tests, it was confirmed that she was diagnosed with Conflict Aggression.

To manage and treat Ruby’s aggression, her owners were advised of the need for lifelong management. As such, they were instructed to refrain from punishment, as any form of confrontation tends to escalate aggression in the moment and worsen aggression for the long-term as well. It also was recommended that they avoid all situations that had resulted in aggression in the past, except when engaged in prescribed behavior modification exercises.

Ruby’s day-to-day behavior was to be managed with cues and rewards for compliance for all interactions and as needed to redirect her at the first sign of tension. Dogs with Conflict Aggression do best when we have their buy-in for compliance; they especially struggle and may become aggressive if physically forced or scolded into listening. Desensitization and counter-conditioning (DS/CC) exercises were implemented for Ruby’s specific triggers. The owners were instructed to gently touch Ruby on parts of her body that elicited no reaction and follow each contact with a palatable treat. These instructions included gradually working up to touching the parts of Ruby that did cause an aggressive reaction, like her back or touching her while at rest.

In a similar manner, the owners were coached to practice DS/ CC to the process of getting Ruby’s harness on and off. They were told to show Ruby the harness and then offer a palatable treat. Then they worked on clasping and unclasping the harness while near Rudy, offering her a treat with each clasp sound. The owners then worked on placing the harness around Rudy’s chest and eventually placing it on her and clasping it prior to offering the treat. The male owner was instructed to practice short sessions of DS/CC during which he would approach Ruby while at rest on the floor and couch, but not so close that a reaction was elicited, and toss her a treat. In a similar manner, DS/CC was implemented when Ruby was on the female owner’s lap. The variation, however, was that treats were offered by the female owner contingent on the male owner’s gradually nearer approaches.

After six months of at-home management and a low dose of medication (paroxetine 10 mg. per day without any adverse effects reported), Ruby was no longer exhibiting signs of aggression when touched on her back and when at rest, and the owners were able to get the harness on and off her without incident. A baby gate remained in place to keep both dogs out of the kitchen. Ruby no longer exhibited aggression when approached by the male owner whether she was at rest on the ottoman or the female owner’s lap. 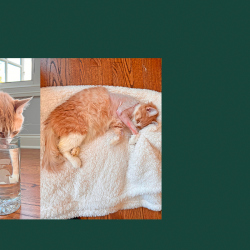 The story about Skylar Gray, a client of the MSU Large Animal Clinic, and Violet, her pot-bellied pig—and how getting Violet spayed saved her life.