Dr. Jack Kottwitz, assistant professor in the Department of Large Animal Clinical Sciences and the Department of Pharmacology and Toxicology at the Michigan State University College of Veterinary Medicine, was encouraged to pursue veterinary medicine by his now-wife, Dr. Amelia Munsterman. He hadn’t considered the pathway before but took the advice to heart.

“As a farm kid from Missouri, working with animals made sense,” Kottwitz says. He graduated with a DVM degree four years later.

Feeling he needed to “learn more to do more,” Kottwitz completed an exotic animal medicine internship at The Ohio State University, an opportunity that let him work with animals at a nearby zoo. “I spent as much time at the Columbus Zoo as on campus some weeks,” he says. He went on as a resident in avian and zoological companion animal medicine at the Animal Medical Center of New York City, and later he completed a veterinary clinical pharmacology residency and earned his PhD at Auburn University. 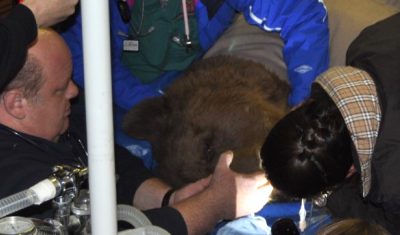 While Kottwitz was at Auburn University, an animal sanctuary phoned the veterinary school to ask if anybody could help them treat a bear.

“I said, ‘hey, I haven’t anesthetized a bear in a while, let’s go,’” says Kottwitz. (He ended up serving as one of the sanctuary’s veterinarians for seven years, while also completing residency and PhD.) “I have an interest in bears; there’s a lot to them. I think they are way more intelligent than we give them credit for. Bears are fun, they’re smart, and they can kill you. It’s the perfect mix.”

Along the way, his experience as a veterinarian at several zoos, private practices, and sanctuaries put him face-to-face with a diverse set of animals. “I treated everything from copperheads to water buffalo while working in Kentucky,” he says. “Later: lions, tigers, giant snakes, tarantulas; anything really.”

Look at Kottwitz’s publications, and you’ll see titles like “Pharmacokinetics of Orally-Administered Flunixin Meglumine in African and Asian Elephants” and “Use of Oral Fluralaner to Successfully Manage Adult-Onset Generalized Demodicosis in a Silver Fox.” How does a veterinarian who has worked so much with exotic animals end up doing research in pharmacology?

“Dr. Dawn Boothe at Auburn University brought me in to talk about research and ultimately offered me a position in her lab in a PhD/clinical pharmacology residency,” Kottwitz says. “I hadn’t enjoyed that area before, but I walked out of her office thinking about it.” He took the opportunity, and ended up focusing much of his PhD work on clinical pharmacology in elephants.

Kottwitz sees his research not so much as answering a question, but filling a gap.

“Outside of domestic species, there are massive holes in our drug information,” he says. “A lot the info is anecdotal. My interest is in the efficacy and adverse effects of drugs, and finding uses for existing drugs beyond what they were originally marketed for.”

He describes work of his in which cyclobenzaprine, a muscle relaxant, was used to facilitate sleep within bears. “It worked miracles in the first bear we gave it to,” he says. “Much of my work is about using drugs to make the patient experience better, creating a better quality of life. I just want to make them happy.”

Arriving at Michigan State in 2020, during the pandemic, Kottwitz has learned to teach and conduct research in the face of setbacks. One thing that has been strong despite it all is the student population he works with. “Teaching is good. MSU students are good,” he says. “I’m impressed by the students here. We’ve got a group of students that, across the board, ask good questions. They think. They’re leading the future of veterinary medicine in a good way.”

Categories: New at the Zoo