ATTENTION, PLEASE SHARE WIDELY: beginning Wednesday, May 5, the MSU Small Animal Emergency Service will only be able to admit patients that our clinicians consider unstable or to have a life-threatening condition. Please visit the Hospital's website for more information: http://spr.ly/6188HCNNY

For as long as she could remember, Skylar Gray had wanted a pet. Like clockwork, each year when her birthday rolled around, she would ask for a different kind of animal to love, care for, and call her own. And each year, her parents said no—until her 16th birthday. In an attempt to finally bring home a furry friend, Skylar threw her parents for a loop; “I asked for a pig,” says Skylar. “Though I really wanted one, I never thought they would say yes.” Skylar’s parents said no to getting her a dog, cat, hamster, turtle, hedgehog—you name it. However, her 16th birthday must’ve been different because to Skylar’s surprise, her parents said yes and got her a pot-bellied pig. I guess if you wish for long enough, birthday wishes do you come true.

“I had very little to no knowledge of what raising a pig would be like, and I had no idea the effect she (Skylar’s pig, Violet) would have on my life,” says Skylar. As a 16-year-old without a job, Skylar found that much of Violet’s care was doable. However, there was one large expense that she never seemed to be able to save up for: getting her spayed.

In pigs, sheep, and cattle, repeated estrus cycles (commonly called heat) without pregnancy increases the amount of estrogen exposure that can promote uterine and reproductive organ complications, like endometrial hyperplasia (a condition in which the lining of the uterus becomes abnormally thick).

“Violet remained intact for eight years, during which time we were fortunate to experience no issues,” says Skylar. “Then like clockwork, at the beginning of her heat cycle in August 2018, I noticed that Violet had some protruding tissue from her vaginal area.” The issue resolved itself in less than a day, so Skylar waited to have her examined until her scheduled “spa day” at the MSU Veterinary Medical Center’s Large Animal Clinic a few weeks later.

During Violet's heat cycle the following month (September 2018), she had significantly more protruding tissue, except this time it did not resolve on its own. “I spoke with Dr. Strachota at the Michigan State University Veterinary Medical Center’s Large Animal Clinic and was able to get Violet in that same day to be examined,” says Skylar. After Violet was examined by several veterinarians, she was sedated so that the protruding tissue could be removed and tested.

“It was a scary moment as a pet parent but knowing there were so many experienced veterinarians taking care of Violet helped ease my worry,” says Skylar. Violet was able to go home that same day, Skylar just had to wait for the results of the labs tests that Dr. Strachota admitted—to confirm or deny that the protruding tissue was a result of cystic endometrial hyperplasia (CEH, which is a condition of excessive number of cells in the inner lining of the uterus, causing the crowding and budding of the glands and gland cells) or neoplasia (the presence or formation of new, abnormal growth of tissue).

“Though I was beyond grateful that Violet was okay, I was concerned about the financial aspect of her condition,” says Skylar. “I work part time and go to school full time, so even though I would give anything for Violet to be healthy and happy, I wasn't sure of what I would be able to do to if there was something wrong with her.”

Dr. Strachota called back a couple of weeks later with the result of Violet's biopsy; she informed Skylar that the CEH diagnosis was confirmed and that it would be best for Violet to be spayed. “Dr. Strachota also informed me that she had been able to secure funding to have Violet's procedure covered and that she would like to use Violet's case for research,” says Skylar. “I can't even begin to stress how much it meant to me that Violet was going to be able to receive the treatment that she needed, and that I was able to focus all of my energy on her.”

The few weeks prior to Violet’s surgery flew by. Before she and Skylar knew it, they were back at the MSU Large Animal Clinic. “When it came time to drop Violet off for her procedure, I was a mess. I hate leaving her alone, but the staff at MSU's Large Animal Clinic seemed to love Violet almost as much as I do; I knew she was in good hands,” says Skylar. “I came back to the MSU Large Animal Clinic the next day and was allowed to watch Violet’s procedure. It wasn't easy seeing her like that (in surgery and all) but being there and being allowed to see what was happening eased my nerves.” Skylar tried to have Violet spayed earlier in the year, but due to a bad reaction to the anesthesia, the procedure could not be done. This time around, and knowing her history with anesthesia, there were three anesthesiologists in the operating room with Violet at all times.

“The amount of care and attention that Violet was given are part of what made such a stressful day more bearable,” says Skylar, who was able to spend some time with Violet after her surgery, before she needed to leave for work. “She was much like any other post-surgery patient; she was shaking from the anesthesia wearing off and had some pain, but I knew that was to be expected. It broke my heart having to leave her again, but I reminded myself that she had a team of people, more qualified than I, who dedicated to taking care of her.”

The following day, Skylar returned to the MSU Large Animal Clinic to take Violet home. “When I got to MSU to pick her up, she was back to herself; sassy, opinionated, and stubborn, but sweet, loving, and snuggly,” says Skylar.

“I am so grateful to Dr. Strachota, Dr. Jacobs, and everyone else who made Violet's care exceptional during her time at MSU. Thank you—thank you so much for giving me my healthy girl back. It is because of you that I can expect Violet to be around for a long, long time.”

Aggression Toward Owners is Always Problematic, but When is it Pathologic? By Katheryn L. Sullivan Kutil on April 02, 2019

Dr. Marie Hopfensperger explains Conflict Aggression, the diagnosis of a typical variant of owner directed aggression, and how to treat it. 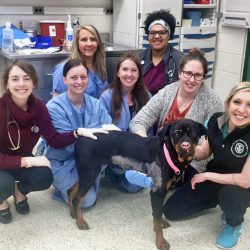 Out of the Fire and into the ICU: MSU Saves Dog Rescued from House Fire By Katheryn L. Sullivan Kutil on April 01, 2019

After being rescued from a house fire, Stella, a two-year-old female Rottweiler, fought for her life at the Michigan State University Veterinary Medical Center’s Emergency and Critical Care Medicine Service.