Coraline is a 6-month-old intact female domestic short hair feline who presented to Michigan State University Emergency and Critical Care Medicine Service (ECCM) following an incident where a clothes hanger was stuck in her mouth. Coraline’s owners found her under the bed with a clothes hanger stuck inside her mouth. The hanger was unable to be removed with gentle manipulation and Coraline was distressed so the owners rushed her into the car to bring to MSU. On the way to MSU, the hanger came loose and fell out of her mouth. Following the hanger coming out Coraline appeared much calmer. Prior to this incident, she was scheduled to have her ovariohysterectomy (spay) the following day with her primary care veterinarian. Pre-operative bloodwork had been performed the week prior in preparation for her procedure and was unremarkable. Aside from this event, Coraline is healthy, updated on her vaccines with no concerns.

Following presentation, a full physical exam was performed. Due to the amount of discomfort, Coraline was in when the hanger was lodged in the mouth and an unknown amount of trauma caused, neck and chest radiographs were recommended. Cervical radiographs revealed subcutaneous emphysema along the neck in the rostral aspect of the trachea and esophagus. The thoracic radiographs revealed subcutaneous emphysema, mild pneumothorax along with pneumomediastinum, and a foreign body in the mid-thorax. Due to the radiographic findings a head, neck, and chest computed tomography (CT) were performed to further assess the soft tissue trauma and better characterize the foreign material.

The CT confirmed the foreign body within the pleural space along with the pneumothorax and pneumomediastinum. The foreign material appeared to be consistent with the plastic cover of the tip of the hanger. The subcutaneous emphysema traversed along the right and left cervical regions caudally down the right aspect of the axilla and soft tissues over the right hemithorax. While there was no obvious indication of where the foreign body entered the thoracic cavity, there was concern about the integrity of the esophagus due to the subcutaneous emphysema adjacent to the esophagus which could indicate an esophageal perforation. If the tip of the coat hanger did perforate through the esophagus, then the plastic tip cover could pop off and travel down the neck through the thoracic inlet and enter the thoracic cavity. While sedated for the imaging, a full oral exam was performed. There was bruising and swelling underneath the tongue, however, there were no punctures or lacerations noted.

Venous blood gas was performed which was overall unremarkable. Coraline was hospitalized overnight with the MSU ECCM Service with supportive care and then transferred to the MSU Soft Tissue Surgery Service for a surgical consult to discuss options for removal of plastic tip cover within the chest.

Following transfer to the MSU Soft Tissue Surgery Service, the MSU Internal Medicine Service was consulted to discuss performing endoscopy and tracheoscopy to assess their integrity. Coraline was placed under general anesthesia by the MSU Anesthesiology Department while the Internal Medicine Department performed a bronchoscopy and endoscopy. Bronchoscopy confirmed a normal trachea with no perforations. Esophagoscopy revealed two full-thickness lacerations within the cranial esophagus. There were signs of early healing present within the esophageal defects. There was no foreign material remaining within the perforations.

When hospitalized overnight prior to transferring to the MSU Soft Tissue Surgery Service, Coraline was hospitalized on intravenous fluids (LRS), antibiotics (Unasyn 30mg/ kg IV q8hrs, Ceftazidime 40mg/ kg IV q6hrs, Metronidazole 10mg/ kg IV q12hrs) and pain medications (Buprenorphine 0.015mg/kg IV q8hrs). When she was placed under general anesthesia for the bronchoscopy and endoscopy bilateral thoracostomy, tubes were placed to relieve the pneumothorax prior to her procedures.

Following her scoping procedure, Coraline was clipped and aseptically prepped for a median sternotomy, and ventral cervical neck explore. A median sternotomy was chosen to retrieve the foreign object versus an intercostal thoracotomy as this provided the most visibility of the pulmonary parenchyma and thoracic wall to identify any potential injuries. Upon opening the sternum, the foreign object was identified and removed from the right caudal lung field. Bruising was noted on the right middle and caudal lung lobes. Bruising and atelectasis were noted on the left caudal lung lobe. There were no lacerations or punctures noted within the thoracic cavity.

Anaerobic and aerobic cultures of the pleural fluid were collected and submitted prior to a routine closure. These cultures showed no growth of any bacteria. The previously placed thoracostomy tubes were left in place. A ventral cervical approach was performed to evaluate the esophagus. There were no obvious signs of injury or perforation found, but there was an area of thinning of the esophageal wall. Copious warm saline lavage was performed of the area, but no repair was required. A nasogastric tube was placed in recovery and radiographs confirmed appropriate placement. Coraline recovered in the intensive care unit with close monitoring by MSU’s veterinary nurses to guarantee a smooth recovery.

Coraline remained hospitalized post-operatively on a Fentanyl CRI at 4mcg/kg/hr, Gabapentin 10 mg/ kg PO q8hrs for immediate pain control. She was then transitioned to Buprenorphine 0.03mg/kg IV q8hr. Aggressive monitoring of her thoracic chest tubes, vital signs, blood pressure, oxygenation, and nasogastric tube feedings were performed. She was started on enteral tube feedings two hours following her procedure but held off any oral food or water for 48 hours post-operative.

Her thoracostomy tubes were removed 48 hours following her procedure once fluid and air production ceased. Her nasogastric tube was removed prior to discharge. She was discharged four days following admission to the Hospital once her pain was well controlled on her oral medications and vitals remained stable. She was discharged on 7 days of Clavamox (19 mg/kg PO q 12 hrs.), 3 days of Buprenorphine (0.03 mg/kg TM q8 hrs.), and 14 days of Gabapentin 10 mg/kg PO q 8 hrs. She was discharged with an Elizabethan collar to prevent grooming of the incision site. Discharge instructions included confinement to prevent any jumping or free roaming along with no use of clay-based litters to prevent a surgical site infection.

Coraline had a recheck 12 days following her procedure. The incision site and previous thoracostomy tube sites were all healed with no indications of infection. Her vital parameters and physical exam were all normal. Her owners reported that she had been doing great at home, eating, and drinking normally, and acting more like herself every day. As her cultures did not indicate any bacteria, they discontinued her Clavamox upon completing her 7-day course. She was only on Gabapentin every 8-12 hrs. for pain at the time of her recheck. As her incisions had healed and she was not painful on examination owners were instructed to discontinue the Gabapentin and let her resume her normal kitten activities, but to stay away from chewing on hangers. No further rechecks were necessary as she had healed well but they were instructed to call if there were concerns or if Coraline had any future “hang ups.” 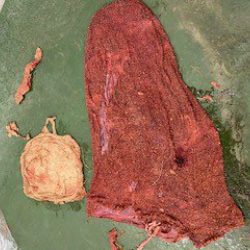 A Unique Presentation of Equine Dystocia at MSU By Julie Strachota, Ashley VanderBroek on January 11, 2022 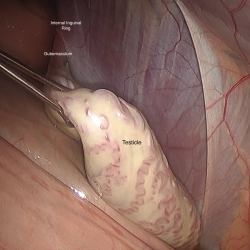 The Case of the Missing Testicle—MSU Equine Surgeons are on the Hunt! By Ashley VanderBroek on August 11, 2021 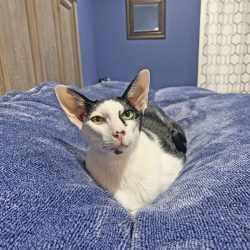